How to Draw a Green Sea Turtle Step 10: Use the arc on the right as a guide to draw the sea turtle's front flipper. Lightly sketch out the shape of the flipper as you follow the basic path of the arc. When you get the structure right, darken the lines. The right side arcs more and connects to the shell at the top. The left side is made up of a wavy line. Step 11: Draw the top half of the sea turtle's shell by using the initial shapes as guides. Follow the path of the line created by the original circle and the arc to create the top of the shell. Draw the bottom portion by lightly drawing a long line across both shapes. The top and bottom shell don't meet in the middle of the initial shapes. The line is closer to the bottom. Draw using small, slightly arched lines as you darken the bottom instead of a single long, curved line. Step 12: Draw the pentagon-like shapes on the top part of the sea turtle's shell. First lightly draw a long curved line near the bottom and a few pointed lines at the top for structure. Once you have the basic pattern lightly sketched, darken the lines. The bottom of the shapes are formed by lines similar to wide letter V's. Now draw vertical lines to create the pentagon-like shapes in the middle. The lines start at the tips of the top shapes and end at the lightly sketched line at the bottom. Now draw a series of short lines along the bottom to create the small shapes along the edge of the top shell. Drawing the shapes on the shell can be a little tricky, so remember to pause the video as you follow along. 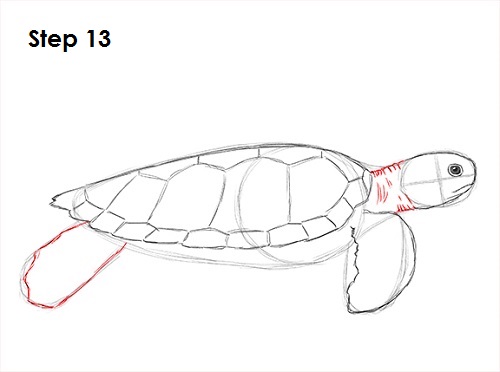 Step 14: Darken the bottom line to create the lower half of the sea turtle's shell.
Joomla templates by a4joomla