How to Draw a Dragon (Cartoon) VIDEO & Step-by-Step Pictures Step 16: Draw a horizontal line to the left of the head for the top of the body. Don't overlap the wing. To the right, draw a big U-shaped line for the top part of the dragon's tail. At the bottom, draw another U-shaped line to make the shape thick and the tip pointy. 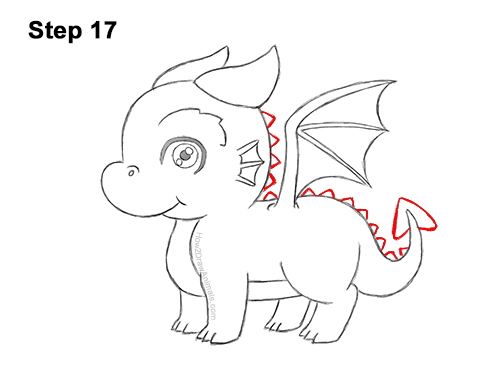 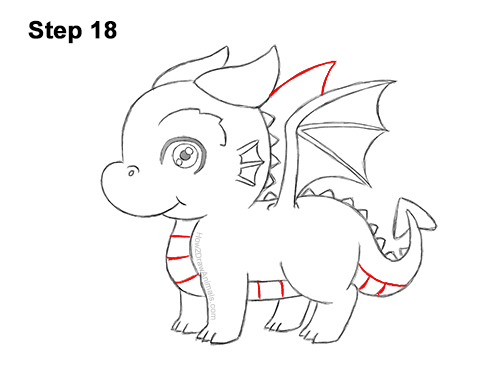 Step 18: At the top, draw an angled line for the other wing peeking out from behind. Draw a series of lines along the bottom of the body for bigger scales. For the dragon's tail, draw the top portion first, and then add a couple of lines inside. Step 19: Using a pen or marker, carefully go over the lines to make your cartoon dragon drawing permanent. After the ink dries, get rid of every pencil mark with an eraser. 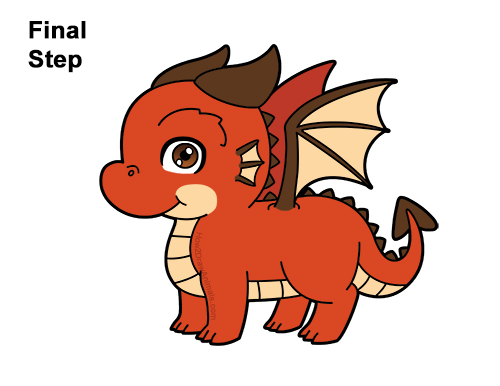 Final Step: Color your cartoon dragon drawing! Use brown for the horns, spikes and wing edges. Use red-orange for the body but leave the lower jaw and the inside of the eye blank. You can color your dragon any other color you'd like instead, like blue, purple or green! Color the rest of the body peach. If you don't have peach, use yellow or light orange. Use light and dark brown for the eye. Don't forget to pause the video to draw at your own pace.