Step 5: Draw the snake's nasal pit and mouth on the right side of the head. Draw a small line for the pit and a longer, curved line that extends toward the back of the head for the snake's mouth. 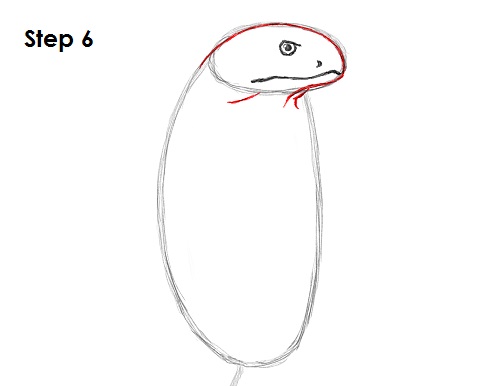 Step 6: Use the initial oval shape as a guide to draw the rest of the snake's head. Make it dip lower toward the mouth and draw a few lines under the snake's jaw. Step 7: Use the oval below the head as a guide to draw the extended hood. King cobra snakes generally have a thin hood, but you can draw yours as wide as you like. Draw a couple of curved lines within the snake's hood to add structure. Step 8: Use the initial line as a guide to draw the rest of the snake's body. Simply follow the line and make the body thicker. If you drew a straight line initially, the snake's body will be easier to draw. You can also draw the body of your snake as thin or as thick as you want. Remember to pause the video if you need help completing the snake's body. Step 9 (optional): For a cleaner look, erase as much as you can of the initial guide lines. Don't worry about erasing all the guides. It's okay to leave some behind.

Final Step (optional): Add some shading to give your king cobra snake drawing more dimension and volume. Pick the direction of the light source when shading so that the shadows are consistent with it. Vary the pressure on your pencil to get your different degrees of tonal value. You can leave a portion of the snake's body unshaded to represent the sheen of the scales.

You can add more value throughout your snake drawing for extra detail. It's a good idea to use reference to be as accurate as possible.